We’re going to look at solving Binox puzzles in this post today. The game has also been known to go under the popular name Tic-tac Logic if you are familiar with that.

If you just want to try it, you can find that here.

What is the game?

Binox is a binary game with a board looking like this: 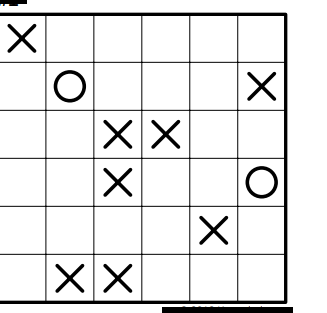 The objective is to fill the entire board with either “X” or “O” given some rule scheme – which varies in difficulty. The rules are as follows:

… since there is 3 of the same character in a row. However, something like ` XX00XO` is legal

With these restrictions, solving the puzzle becomes a bit more than just throwing random “X” and “O”s at the grid. Let’s look at an algorithm that can solve this.

The simplest thing that can solve this

I tried a few things that were “clever” and “complicated” such as generating permutations of rows and comparing to other possibilities for other rows. We won’t go over those – since it turns out the best solution I found is one of the simpler ones! You can read about general strategy on the web but the example I’m going to step through below is a general approach I came up with.

The algorithm is as follows:

Let’s break down why this is the case.

Of course, this is easy to describe so we can encode it inside of an application. I won’t go over all the implementation details but you can describe the entire main algorithm like so, in Javascript:

You could even cut some of this down a bit as well. You can dig into the actual implementation of some of these rules in the full implementation on my Github. It’s a short read – the entire thing (with all the tests, which is most of the code) clocks in at less than 1000 lines of code. It should be easy to digest.

Using the above rules, we can then run the program and find:

If we step through these picks, we can see the rationale.

… and there are more iterations. The number of choices grows smaller with each pick so the queue grows smaller until it reaches zero. There are more boards it has been tested on; you can check them out in the tests. I have some plans to add more tests from the PDFs provided. However, I tried to do a couple “cURLS” to get the PDFs and stopped being able to access the author’s site from home. Huh.

I’ve probably been blocked. Not sure why.

Some heuristics could be developed to pick the points to prevent cycling through the list to find a valid one. For example, in the case of “exceeding quota” in a specific column and “forcing” a single token such as in example #1 and #2 above, we could have easily filled in the entire column. The solver began to do this but once it reached another point it could solve it just did that one first instead. The current implementation just uses a dequeue and pushes things to the back if i t can’t find something it can place immediately.

There’s probably other speed improvements to be made too: like not writing this in Javascript. But the solver runs so fast, already even with larger boards that I’m not that motivated to do much else. It was a fun afternoon project – now it’s time to say goodbye for now.